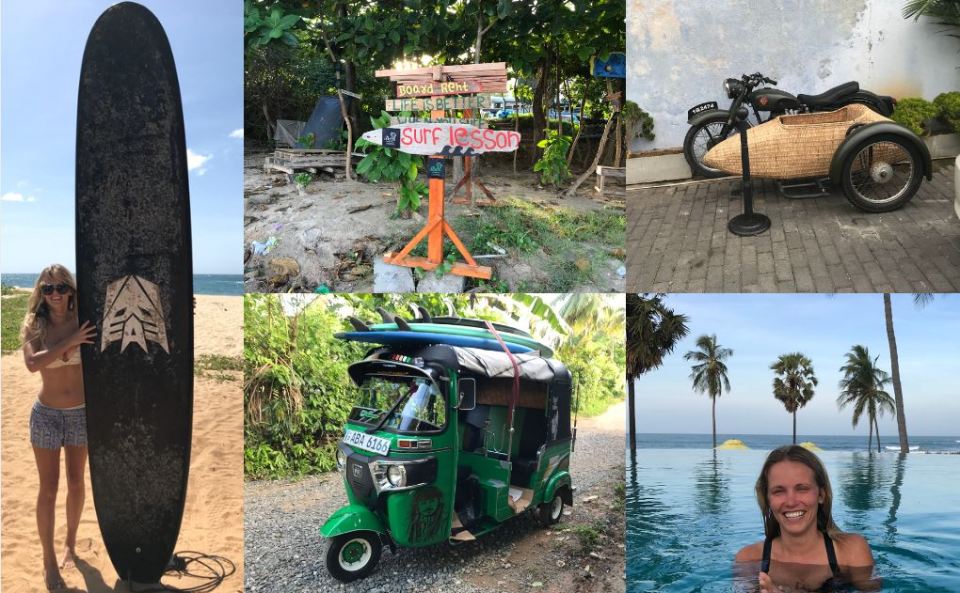 While I was in Sri Lanka, three celebrities died by suicide. Two high profile – Kate Spade and Anthony Bourdain, and another – Jackson Odell – up-and-coming, only 20. His life hadn’t even started.

Maybe I’m harping on about it a little bit too much now. But if anything, the number of suicides – as far as I can see – is ramping up. WHO data confirms this: the global rate has increased 60% in the last 45 years and suicide is now one of the main causes of death among those aged 15 to 44.

Without belittling the crippling disease of depression, all I could think was that I wish I could take those who are suicidal here to where I write this from: an eco-resort overlooking Arugam Bay.

It could, of course, be argued that wouldn’t solve the root cause or necessarily have long-term implications, but it would allow someone with depression to try and step out of their lives and just be for a moment.

The water here is clear and warm and blue and silky to touch. Each stroke when you paddle between waves peeling off Lighthouse Point is easy, like a warmed metal scoop slicing through melted ice-cream. The colours are brighter here too, it seems, like paradise in technicolour, from the deep greens of the tropical rainforest to the purples and golds of villagers’ saris to the royal blue and turquoise cushions on loungers next to a glittery navy infinity pool at Jetwing Surf.

It’s a stark contrast to the utter beige–ness of Western tourism, like somehow the possibility of outdoor furniture fading has made many of our lives – colour wise – outright bland.

Mindfulness is the buzz word of this trip for me, aided by Sam Bleakley’s book Mindfulness and Surfing: Reflections for Saltwater Souls and twice-daily surfs on a longboard in soft waves and yoga in the early evenings with candlelight dancing across concrete walls and the ubiquitous smell of incense. Nice incense though – not the awful stuff that smells like pot pourri.

Mindfulness is not going to solve depression outright. But it helps.

It’s like this four-month trip has had a purposeful emotional journey for me too – trying to ruffle me a little with illness and loneliness then heal me with surfing and soulfulness. You can’t help an issue by simply staring at it from the outside. And all polishing is achieved by friction, Mary Parker Follet said, and diamonds are formed under pressure.

I think if only I could get those suffering from depression to see that when they come out the other side, the parts where they were broken will make them even stronger. The most inspiring people I know I have triumphed over tragedy.

Ironically, the same could be said for Sri Lanka, which has blossomed into a beautiful and quiet sanctuary – at least in Arugam Bay, anyway – after a violent 26-year war; the longest in all of Asia.

The war, between the Sri Lankan government and the Liberation Tigers of Tamil Eelam (Tamil Tigers or the LTTE) finally came to an end in a bloody last battle at Mullaitivu in May 2009.  But in the months preceding this, more than 40,000 civilians were slaugtered, according to the United Nations. The Sri Lankan government denies civilian deaths but the country is often grouped with flagrant human rights’ abusers such as Syria and Yemen.

The trip started in the south of Sri Lanka at a surfing and yoga retreat called Soul & Surf.

The pastels of the hotel are a stark contrast to the colours outside: it is an area of calm. Everything is done for you: your meals, your surf schedule, rest times, even a dedicated slot in the timetable for eating bliss balls made from dates and drinking fresh coconut from glass straws.

Every morning, after vinyasa flow, you pile surfboards atop tuk tuks plastered with Billabong stickers or pictures of Hindu gods and mottos like “No pain no gain” emblazoned across the rear, and – blasting number one 90s hits like Venga Boys “Boom boom boom” or Aqua’s “I’m a Barbie Girl” – head to Weligama.

The trip to the beach break on Sri Lanka’s southern coast passes through windy and narrow tarseal roads, dodging wild dogs basking in the sun and in no real hurry to get out of the way. Parking is on the side of the road on the beach front, where fisherman stand and show off their wares. Like most beaches these days – around the world – rubbish litters the shore and rivers.

But the water itself is warm and the waves are rights and gentle: perfect for longboarding. Coaches are in the water with you, morning and afternoon. There’s no better way to improve – or start – surfing, I think.

The days are hot and the several hours between surfs are spent poolside in the retreat compound. You make friends from all around the world, each with their own lives and stories, so different – yet similar all the same – to yours.

The food is glorious – rice pudding for breakfast (gluten-free, of course), curries for lunch or dinner (Sri Lanka hot) and a variety of colourful and delicious salads. There’s a book exchange and house dogs and wonderful staff from the UK, Australia and Sri Lanka, all with their own stories too.

It’s a retreat of rest and reset. You can surf as much, or as little, as you like: but I opt for every day. My surfing has improved dramatically since facing my fears in Hawaii. Longboarding to me is an act of mindfulness. Paddling and surfing are both gentle. You’re in the moment, in the ocean, alive, without a worry on your mind. (Except in big swells or when someone’s ploughing straight into your face, haha.)

Arugam Bay is a famous surfing region, and the beaches are nicer here than on the west coast. Jetwing Surf is a great hotel to stay in, with incredible architecture and great food (though service tends to be on island time).

The drive to Arugam Bay is about five hours, and it’s worth tying in a safari trip on the way. The safaris are good because they are through nature reserves and you keep well clear of elephants and crocodiles – observing them from a distance so as not to disturb them.

Some of the drivers have teeth stained by betel nut. It’s a problem in Sri Lanka.

All beaches are right-hand breaks, with white sand and tepid water. Peanut Farm and Lighthouse Point are both worth a look.  Arugam rounded off the trip and was the perfect finish. Until next time!