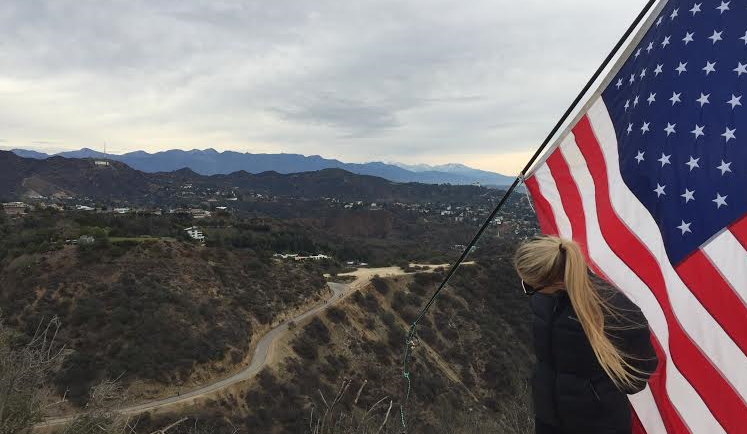 The best kind of grade is a complimentary upgrade. And so it began, the 12-hour flight from Auckland to Los Angles in Air New Zealand’s new premium economy booths, armed with a handy little travel pack containing paua-patterned eye masks, ear plugs, Antipodes lip conditioner, toothbrush, toothpaste and a pen. Also: a real pillow, a foot rest beanbag, real forks and knives and a gourmet meal with cubed potatoes. It was Christmas Day and our bellies were already full with Kiwi holiday fare like pavlova and ham. Sweet dreams.

It was 2pm Christmas Day when we landed and my first (extremely insightful) observation was that it wascold. My second thought was that I would like some nachos (a recurring wish). We cabbed to our hotel – W in Hollywood (nice, clean, recommended) – before venturing out to an Irish style pub on the strip. My nachos were covered in jalapenos and electric yellow cheese and some other unidentified sauce and – while I’m wasn’t angry – I was left feeling a little disappointed.

The next morning, on the “coffee floor”, I encountered a middle-aged woman looking for lids for her takeaway Americano. I made a typical “how’s the weather” type comment – specifically, rather enthusiastically “Oh, can’t get by without my morning coffee!” – to which she responded in a thick American accent: “Me either. But my husband has a morning coke – and there’s none here.” AMURICA.

Shortly after, kitted out in standard Kiwi winter activity attire (Kathmandu jackets); a group of us attempted to walk to the Hollywood sign, but ended up looking at it from quite a distance. We weren’t  compelled to drive across town to find the actual Hollywood sign track. Instead we headed to Urth Café – Kylie Jenner’s fave. It was generally quite tasty, had gluten-free bread, very bitter coffee and a distinct lack of Kylie’s lips. Gutted.

Navigating our way to Newport was no easy feat with a GPS navigation system from 1982 (thanks Sixty Rentals). But, once we were there, I was smitten with the pastel houses lining the beach. We’d taken a relaxed “see when we get there” approach to accommodation, and found this quaint just along from the Newport Beach Pier called Doryman’s. It had Victorian style furniture, floral wallpaper and curtains, and Victorian art featuring women in various stages of undress that prompted us to question if it had been a brothel. Indeed it had, the concierge confirmed. I wondered if its patrons really got the opportunity to appreciate its stunning waterfront views.

Day turned into night and peckish, we ventured to the next block of shops and restaurants. One of the restaurants was Italian restaurant Ill Farro which, it transpired, has a fantastic gluten-free menu. They even brought out gluten-free garlic bread as an entrée. I gorged on this and couldn’t eat much of my spaghetti bolognese, which I wanted to oh-so-badly, but just couldn’t fit it in. A++++. Then it was back to our room with its sordid past, warm, enticing gas fireplace and sheets with surprisingly high spread count. Night.

Come morning, we were well slept and ready to venture. We wander down the pier and the boardwalk, looking at the number of boarded up and dilapidated beachfront properties sitting between beautifully renovated houses. It’s a real mix.

There was a tiny wave breaking on the shore, and it was six degrees Celsius, yet twenty keen surfers in steamers still lined the water.

We had breakfast at Doryman’s, ready for a big of driving. Next stop, Vegas.